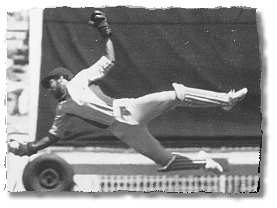 Dujon has finally made it in cricketing terms by signing for KMCC midway through the 2000 season. An undisputedly fine wicket keeper and large hitter of the ball this rotund fellow with the eccentric ways of all members of the union of wicket and goal keepers is a valuable addition to the KMCC line up.

Too long to list on this page alone - he's had more clubs than Colin Montgomery over the years and is reknowned for his outrageous appeals, "ooooo"'s and has even been mentioned in several tabloid papers (including the Sport) for running about the field in just a jockstrap. A great winder up of the opposition such that a new mode of dismissal has been invented to encompass his game - The little known "Badgered Out". Oh yes and he's also played for Galphay.